Pioneering cardiologists at Davies Veterinary Specialists have used a groundbreaking heart procedure to save the life of a French Bulldog puppy. The four-month-old bitch was diagnosed with severe and deteriorating pulmonic stenosis. A conventional balloon valvuloplasty had failed so Davies Cardiology Specialist Pedro Oliveira and his team opted to implant a metal stent across the pulmonic valve. It is thought to be the first case treated in the UK with this technique.

Pulmonic stenosis is one of the most common congenital heart defects in dogs. In most cases it is caused by a malformation of the pulmonic valve with fusion of the leaflets (type A stenosis) or with the presence of rudimentary valves accompanied by hypoplasia of the annulus (type B stenosis). Dogs with severe stenosis are at risk of sudden death, heart failure and have a decreased survival time in comparison to normal dogs. Minimally invasive catheter based procedures (balloon valvuloplasty) have become the treatment of choice for valvular pulmonic stenosis, with good results in most cases but unfortunately not all. French Bulldogs are predisposed to the condition and tend to not respond to valvuloplasty as well as other dogs.1

Gracie, a French Bulldog puppy was referred to Pedro Oliveira, RCVS and European Veterinary Specialist in Small Animal Cardiology at Davies, for treatment of severe pulmonic stenosis. An echocardiogram confirmed the presence of a type B stenosis accompanied by marked right ventricular hypertrophy and also an atrial septal defect. A standard balloon valvuloplasty procedure was performed without complications and the dog initially showed improvement but unfortunately she soon began to suffer episodes of weakness and collapse and was readmitted.

An echocardiogram showed that the right ventricular obstruction had worsened. 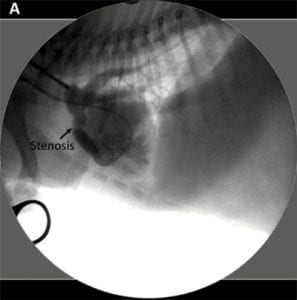 Pedro explained: “Re-stenosis has been reported in up to 16% of cases following balloon valvuloplasty and in this case it was suspected to be due to the formation of scar tissue in the valve leaflets. The pressures inside the right side of the heart were now higher than left allowing blood to flow through the atrial septal defect from the right to the left atrium directly without receiving oxygen from the lungs. Whenever Gracie got excited or tried to exercise she would go “blue” from lack of oxygen and collapse. In fact her quality of life was so poor that euthanasia was suggested at that point. For this reason we decided we should attempt this novel procedure. The only other option would have been open-chest surgery (patch graft) but this held a higher risk of complications during the anaesthesia and even death. Also, the cost of surgery would have been higher than this new option. ”

Pedro Oliveira and fellow cardiologist at Davies, Jose Matos, performed the procedure while another member of the team Antonia Mavropoulou guided them using transoesophageal echocardiography. Under a general anaesthetic the heart structure was carefully assessed using transoesophageal echocardiography and angiography to choose the correct size of the stent for Gracie. An 8 mm wide and 4 cm long stainless steel catheter tightly mounted on a balloon was chosen. This was then positioned across the pulmonic valve and the balloon was expanded forcing the stent to “open up” to its full size. 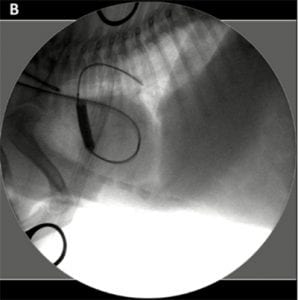 There was an immediate and significant improvement of blood flow through the stent (figure 2C), the patient recovered well and she was discharged four days later. 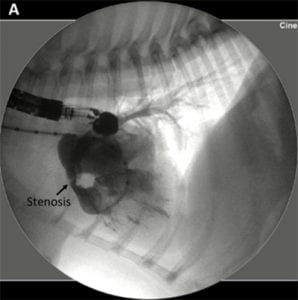 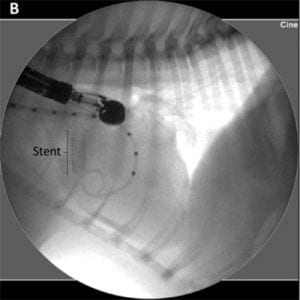 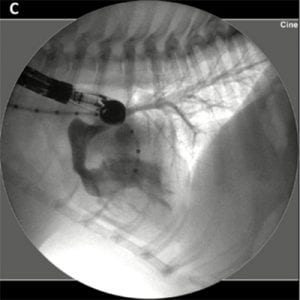 Re-examination after three months showed improved flow across the stent and a reversal of the right to left shunting across the atrial septal defect. Gracie stopped experiencing episodes of collapse or cyanosis and is now able to exercise and lead a more normal life.

“This technique has been used in very few cases in the whole world and to the best of our knowledge this is the first time it has been used in the UK,” said Pedro. “It is more technically challenging and costly than a standard ballooning although it may provide an effective, safe, and cheaper alternative to patch graft surgery. In this particular case we feel it made an important difference in terms of quality of life and prognosis for Gracie.”

“To be honest Gracie only had three choices: open heart surgery, euthanasia or this new procedure,” said Gracie’s owner Anthony Barton. “Sebastian Szpakowski our vet at The Wherry in Bungay, Norfolk referred us to Davies and we believed the new procedure would give her the best chance. It was a knife-edge decision because we were so worried she wouldn’t survive the anaesthetic and all the complications but we are over the moon that we chose this route. 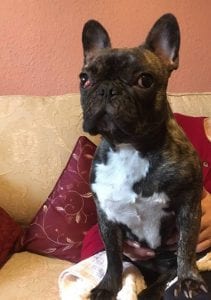 “Gracie is now leaping about and playing with our other four dogs and she has gained weight too. We can’t praise Pedro enough – words can’t explain what he and Davies have done for us. They have given kindness, compassion and care as well as Pedro and his team’s incredible skills. Gracie also needs a respiratory operation to rectify the congenital problem that many French Bulldogs suffer from and we have booked her in to Davies for this surgery when she is ready. I can’t recommend Davies more highly.”

To find out more about Davies visit http://davies.campaignworks.biz